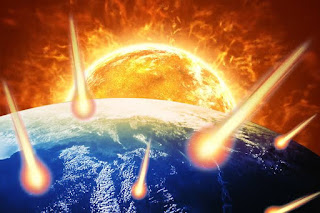 And I saw another sign in heaven, great and marvelous, seven angels having THE SEVEN LAST PLAGUES; for in them has filled up the wrath of God” (Rev. 15:1).

The word “PLAGUES” is translated from the Greek word..... plege meaning “a wound caused by a stripe or blow.” Plege is translated in the King James Bible as “wound” or “wounded” four times; it is rendered “stripes” five times and is rendered “plagues” only in the book of Revelation twelve times.

“Last” plagues in which the passion of God is “filled up” or “complete” signifies that these are the last or final dealings of God with a people.... thus this final dealing brings repentance, victory, and salvation... This is what the "seven last plagues" are designed to do... CRUSH THE LUST OF THE FLESH REALM IN MEN THUS SETTING MAN FREE FROM THE DESIRES OF THE FLESH. Not the last in the sense that God will never deal with them again about anything, but last in that these dealings of the Lord will have completed His work in a "FIRSTFRUIT COMPANY OF PEOPLE to make right what is wrong and transform them into all that He wants them to be. That is the mystery! God will not spare us the destruction of our flesh.... therefore we see here the messenger of God pouring out THE TRUTH... THE TRUTH IS "A PLAGUE" UNTO THE LIE... THE LIE IS THE REALM OF THE FLESH IN MEN.... every time we pour out of our hearts the waters of truth.... truth becomes the "seven last plagues" to the realm of the flesh in men..... These plagues are killing flesh.... and raise the new creation man to higher realms in the Kingdom of God...

There is something else that is last. There are seven of them the "seven last plagues". They are the last seven plagues mentioned in the book of Revelation. What a promising word! They are full of the wrath (the Greek word.... thumos — meaning passion) of God. If we will notice, these plagues are poured out on men, upon the lust of the flesh. Everything carnal will be subjected to and swallowed up by these plagues! It appears that seven plagues, seven days, seven colors of the light spectrum make up THE LAST DAY... THE LAST DAY THAT THE FLESH SHALL EVER INFLUENCE US AGAIN... GLORY, and it swallows up every dark thing in its path. It is like a tidal wave of fire sweeping over the earth. There is nothing but stubble left in its wake…” These "seven last plagues".... bring

God's victory... redemption... and power..... What a redemptive work the glorious plagues are doing ..... even now as we empty out truth upon this earth...

When these seven “last plagues” have gone.... completed their work, accomplished their mission, there will not be any more flesh, carnality, or selfhood dominating in any of the Lord’s people. This will ultimately be true for all men everywhere, as we see after the Revelation, but here it refers to the people of God who are still immature children and who are enslaved in the carnal religious systems of man. There is the same truth as it pertains to the individual — that is, each one of us in our journey into God. The unproductive human identity.... the realm of flesh with its sinful disposition, the soul with its religious inclination, the carnal mind with its humanistic reasoning, planning, and scheming — all must suffer THE SEVEN LAST PLAGUES! Make no mistake about it — God will touch everything in the lives of His people! That is the final outcome of redemption, for He has redeemed us unto Himself and for His pleasure and purpose! Consider the following order of symbols used in the pouring out of the vials. They are poured out upon:... ALL FLESH....... Bro Eby writes...

these are the things.... the seven last plagues must touch.... all these things must be .... spiritually interpreted.... with spiritual understanding and insight.... these are not carnal things...

3. The Rivers and Fountains of Water. (sources of ideas, concepts, culture, teachings, philosophies, doctrines, traditions, customs, carnal knowledge, worldly wisdom, the sources from which carnal men draw their life, their natural joy and refreshment, all that gives vitality to the programs of men. “Rivers” suggest the flow of these ideas as they are taught, propagated, and promoted by human institutions and instrumentalities of all kinds)

5. The Seat of the Beast. (human heart, deceitful above all things and desperately wicked, out of which all evil emanates — also the corrupt seat of spiritual wickedness)

6. The Great River Euphrates. (the power that keeps God’s people enslaved in religious Babylon. The Euphrates River stands symbolically for the separation between the kingdom of religious Babylon and our promised land of inheritance in Christ.

When the last seven plagues have finished their work there will be no more missing the mark, no more childish immaturity, no more deception, no more fleshly manipulation, and control, no more mistakes, no more spiritual bondage, no more falling short, no more sins of omission, and no more resistance to the will of God. There will be no more cause for correction, chastisement, purging, or purification, no more need for gaining more understanding, wisdom, or maturity of stature. Oh, my Father! As long as there remains something of this human nature, Your passion (wrath) is so kindled against it that You do not let it have any rest! For Zion’s sake, You will not hold Your peace, and for Jerusalem’s sake, You will not rest, until the righteousness thereof go forth as brightness and the salvation thereof as a lamp that burneth! You will have no rest, till You establish, and till You make Jerusalem a praise in the earth! (Isa. 62:1,7). Great is the mystery!