The Law of increase 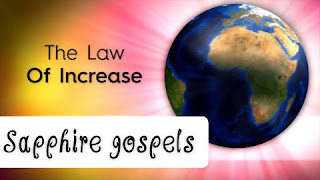 Typically, this spiritual law is called the Law of Use or the Law of Harvest, but I prefer to call it the Law of Increase because the emphasis is on using resources to produce more than we had originally.

In the Parable of the Talents, the master was about to leave on a trip and gave each of three servants an amount of money, each according to his ability. (Mt 25:15) After a long time, he returned and had the servants give account for what they had done with the money.

The first two servants in the parable put their money to work and doubled it, and their master was very pleased. But the third one was afraid and hid the money so he could return it all to his master. At the very least, the master expected him to deposit the money in a bank to earn interest, but considered him wicked and lazy for doing nothing at all and gave his money to the servant with the greatest return.

Two points to consider: (1) An increase is expected and a little is better than none! (2) Those who prove themselves faithful may receive even more return than they were able to produce on their own.

The Parable of the Sower offers a slightly different perspective on the same points. Jesus makes two important statements in his explanation of that parable. “When anyone hears the message about the kingdom and does not understand it, the evil one comes and snatches away what was sown in his heart. This is the seed sown along the path.” (Mt 13:19) “But the one who received the seed that fell on good soil is the man who hears the word and understands it. He produces a crop, yielding a hundred, sixty or thirty times what was sown.” (vs 23)

A key word in these statements is “understand.” In English, this word primarily refers to comprehending, perceiving or grasping intellectually. However, the word in the Greek text describes a process of bringing things together to gain understanding or insight. That is, the emphasis is on the process, rather than the result. In the parable, the person who doesn’t process the message ultimately loses the message’s benefit. The successful person is the one who hears the message, compares it or brings it together with what he already knows to be true, which multiplies the benefit he receives. This is the Law of Increase.

It’s important for us to realize anytime God gives us something — an ability, resource, insight, revelation and such — he holds us accountable for what we do with it. If we don’t use those resources effectively, we can lose them. “Use it or lose it.” If, instead, we apply what we have and use it effectively, we can increase it and God often blesses our efforts by multiplying our results.

Some people want immediate success regardless of how little effort they apply. Get-rich-quick schemes and gambling entice people who want all the benefits without the effort. Yet even the secular world tells us success comes from applying ourselves steadily and consistently over time.

The Law of Increase may be one of the most important spiritual laws and it is relevant to every aspect of our lives. As we use our abilities and resources effectively, especially putting them to work serving others, we can expect them to increase. In part, because consistent use produces increase, just as using a muscle makes it stronger. Also, as we prove ourselves faithful using what we have to serve others, God can entrust us with more.