Pastor Adeboye finally reveals when the killings in Nigeria will end. 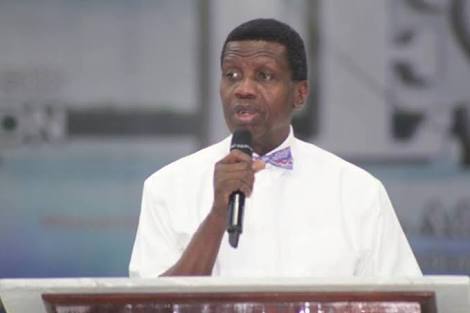 Pastor Adeboye finally reveals when the killings in Nigeria will end.

Pastor Enoch Adejare Adeboye, the general overseer of the Redeemed Christian Church of God (RCCG), has assured Nigerians that the persistent killings of innocent Nigerians across the country will soon come to an end. Adeboye gave the assurance during the Holy Communion service of the church at its 66th annual convention.
The cleric also urged the congregation to use the dominion they received during the programme to work for all-round peace for Nigeria and generations unborn. 1,603 pastors and 50 honourary elders were also ordained during the convention.

Meanwhile, NAIJ.com previously reported that Pastor Enoch Adeboye expressed dismay over the continuous killings in various parts Nigeria. He said the country may cease to exist if nothing is urgently done to end it. The cleric warned that “unless the killings stopped, there may not be elections in 2019 in Nigeria,” noting that no nation can survive a religious war and remain the same. Pastor Adeboye, imams should join politics to move Nigeria forward
Enoch Adejare Adeboye was born on March 2, 1942 in a village in Osun State by the name of Ifewara. His parents, Moses and Esther, were very poor and struggling to bring up Enoch and his three siblings.Moses Adeboye did not think that giving his children education was important. Besides, he was not able to pay the school fees anyway. However, young Enoch felt very strongly about getting formal education.

In order to persuade his father, he decided to go on a hunger strike to make his dad change his mind. It seemed to have worked, as not long after, Enoch began attending the only missionary school in the whole village. In order to afford the school fees, Adeboye Senior had to sell a goat. Despite the fact that Enoch had to start his education rather late, he soon caught up to his classmates. In 1956, he started attending the Ilesha Grammar school, where he discovered a love for mathematics and science.
Enoch was born in a rather complicated time, as by the time he graduated from school and started working on receiving higher education, the Nigerian Civil War broke out. The war, combined with an unfortunate financial position, nipped his ambitions at the bud.

Nevertheless, Adeboye was eventually able to attend the University of Nigeria in Nsukka where he received a Bachelor’s degree in Mathematics in 1967. But he did not stop there. In 1969, he received a Master’s degree in Hydrodynamics and, six years later, in 1975, he achieved a PhD in Applied Mathematics. Enoch obtained both degrees from the University of Lagos. After finally finishing his studies, Adeboye started working on his ambition to become the youngest Vice Chancellor in Nigeria. He began his journey with teaching mathematics at the universities of Ilorin and Lagos.

At some point during his studies, Enoch not only received higher education, but also found himself a wife. He married Foluke Adenike Adeboye in 1968. For the longest time, the two struggled to have children. After some time and effort, they had two kids, but they wanted more. When doctors advised them against it, the Adeboyes decided to turn to God for answers. And boy, did they find them.
Enoch Adeboye first came across the Redeemed Christian Church of God in 1973, when he and his wife were seeking the Lord’s help in having more children. At the time, it was headed by Pastor Josiah Oluwafemi Akindayomi, General Superintendent. On July 29, 1973, Enoch became a born-again Christian and chose to dedicate the rest of his life to God. In two years’ time, he was already a pastor. Enoch’s rise through the church ranks began with translations of Akindayomi’s sermons. He was tasked to translate them from Yoruba to English.

Soon after that, he decided to organise Crusades, Bible Study meetings, Outreaches, Revivals and other events that were very successful among the people. Seeing Adeboye’s dedication, Akindayomi decided that he was the man that was going to succeed him one day. Thus, when Pastor Josiah died back in 1981, he made Adeboye the new General Overseer of the church as his last dying wish.
Pastor Adeboye has not betrayed the faith bestowed upon him for one second. Over the years, he has managed to expand the church’s reach further than anyone could ever imagine. Redeemed Christian Church of God went from being a rather small and unknown Nigerian church to being a vast network of 110 churches all over the world. In Nigeria alone, there are over 14,000 branches of RCCG. As the legislation has passed that restricted the time of church leadership to 20 years, Adeboye stepped down from his post on January 7, 2017 and let Pastor J.O. Obayemi take the reigns. Nevertheless, Pastor Adeboye is still the General Overseer of the church globally.