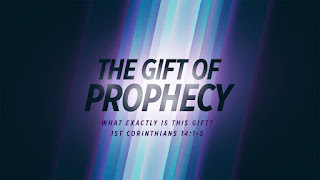 While every Spirit-filled believer can prophesy as a general grace God gave to the entire Church (Joel 2:28–29; Acts 2:15–18; 1 Corinthians. 14:31), the measure we experience the prophetic and are able to walk in it is determined by our hunger. If we can live without it, we most likely will. Those who desire to prophesy should understand the great benefits of prophecy. Prophecy can encourage, comfort, build up, confirm, strengthen, impart, release, renew, refresh, heal, deliver, illuminate, enlighten, direct, expose, warn, convict, correct, bless, quicken, and restore. These many benefits alone should cause every leader, church, and believer to desire to prophesy. Prophets and prophetic people should do more than just prophesy. They should also train and teach others in this area. Every believer should be able to hear the voice of God and release a word on a consistent basis. ROMANS 12:6 AS IT SAYS in the verse above, there are many gifts in the body of Christ that are given through grace, but prophecy is given according to the proportion of faith. Why is it given according to the proportion of faith?

The Prophetic will help to get the river to flow by increasing your measure of faith. Your faith must be accompanied by desire. You must desire to prophesy and then begin to stir up the gift of God within you, as it says in 2 Timothy 1:6. As the gift is stirred, it will begin to flow out of your belly, your spirit, like rivers of living water (John 7:37), bringing life to those who hear The prophetic utterances that flows from the river of God brings dead things back to life... Tonight am going to show you some forms of systems of prophetic activations you can practice on your own Now understand that these activations are not designed to teach you how to prophesy, per se, but how to hear from God and release what you but how to hear from God and release what you hear are designed to encourage you to hear from God, to listen to the Spirit, and to step out in faith and get the river flowing. As you do that, you will develop your prophetic gift. You will be fluent to the degree you are willing to exercise your faith in the process of the activations. These activations am about to give are not rules and regulations... Not at all! They are simply a guideline to help you as you grow in the prophetic but generally, the Holy Spirit can flow with you as He will

Prophetic activation #2: Receive one word; release a prophetic word on, believe God for just one word. It could be grace, power, love, or mercy. Launch from the one word God gives you into the prophetic grace, power, love, or mercy. Sometimes God gives us one word, and as we speak prophetically, the word will expand and flow. Many at times, it's only a word that will drop. Sometimes the word will mean nothing to you at all but the recipient understands what God is communicating If it's only one word you received from the Lord, speak only that word. But be sensitive enough to sense another word, or phrase or sentences coming along with it If the Lord gives you the word power, you might be led to say something like, “My son (or My daughter), My power is available power. Don’t be afraid to walk in My power. As you walk in power, you will see many miracles and breakthroughs in the days to come. But if you are not led to speak any other word, stick to that one word alone. We don't jump in growth of the prophetic gift, we walk... We walk by faith.

Prophetic activation #3:kick-start:pray in the Spirit; release a prophetic word. As you begin to minister, pray in the Spirit, allow the Lord to give you a word or a picture when you are praying, then launch into the prophetic. This tunes your spirit to what God wants to say to the person. Speaking in tongues is a good way to “kick-start” the prophetic flow. Speaking in tongues helps to silence the flesh and the mind and increase your spirit's sensitivity to the Holy Spirit. So when you speak in tongues, You tune in to the frequency of the prophetic Last year, in our ministry at Spirit Envoy Int'l, we had a program titled, Activating the Gift of prophecy. After the teaching, I paired everyone in Spirit Envoy Int'l to speak in tongues for 5minutes Activating the Gift of prophecy for the other. After 5 mins of tongues, we stopped to receive the results.... 90% of the people received accurate prophetic word for his neighbour One girl spoke in tongues and told her neighbour the family secrets that she had not shared with anyone before. Yet she has never prophesied before. This is activation!

Prophetic activation #4: see a picture; release a prophetic word Ask the Lord for a picture, and launch into the prophetic word. This exerciseeing aspect of the prophetic pact of the prophetic. The pictures you can receive are limitless. Pictures are one of the languages of immortal and spirits The ability to accurately interpret a picture you see in the process tells how you are growing in the prophetic. Pictures speaks volumes. They speak more than words God speaks in pictorial forms and in video formats. You can ask your Father to show you pictures. It's your inheritance in Christ Singing

Prophetic activation #5: play music; sing a prophetic word Music. Sound of music. Instrumentals. Prophetic chants. These are spirit communications. If you want to flow in the prophetic frequency, learn to play music or sing a prophetic word repeatedly. This act opens rivers in heaven! This activation requires music and will activate the prophetic song. Follow the music and sing prophetically to the person. Anointed music is a catalyst to the prophetic flow. Another dangerous prophetic activation is Singing in tongues Do this and you will be shocked how the atmosphere will change around you When you sing in tongues, you singing in tongues that Spirit understand... And the spirit that understands what you sing is a Holy Spirit, who is the Lord of spirits.

Prophetic activation #6: Use an object; release a prophetic word This activation will stretch your faith to speak in different areas of a person’s life and increases the visual aspect of the prophetic flow. When you are led to use objects, be sensitive to the leading of the Spirit so that you can flow in the same frequency as Him. Here are a few examples on how this could flow: 1)With a watch you may prophesy to the person concerning God’s timing. 2)With a pen you may release a word about writing. 3)With keys you may release a word about God unlocking and opening doors for them, and so on. Prophetic activation #7: bless the person; release a prophetic word This activation begins with blessing the person you are ministering to. For example, you may say, “I bless you with . . . ” peace, favor, Then you would launch into a prophetic word. You should hear a word when you are blessing them. This helps you flow into the power of prophetic blessing When you BLESS, you are opening up your spirit to hear what God has to say because He is a God that is interested in blessing His people So when you begin to bless the person, you have rolled the stone. Then let the Spirit take over and you will begin to hear other areas of their lives that the Lord wants to bless It is a good thing to bless who God wants to bless!

Prophetic activation #8: beginning with a question Questions such as “Am I not your God?” “Am I not with you?” “Have I been faithful to you?” “Have I not called you?” would begin an activation like Sometimes the prophetic word begins with a question, and then the Lord speaks to us based on the question. In this activation you begin by allowing the Lord to give you a question for the person you are ministering to, and then you launch with a prophetic word. Questions are invitations for answers Questions, especially spirit inspired ones attracts spirit inspired answers.... And those answers will lead to prophetic utterances... Have you not known? Have you not heard? Has it not been told to you from the beginning? Have you not understood from the foundations of the earth? —ISAIAH 40:21

Prophetic activation #10: “if ” prophecies These are prophecies that are conditional—“If you seek me, then I will . . . ,” “If you continue to worship me, then I will . . . ,” “If you are faithful, then I will.. ,” and so on. This activation begins with an if. Ask the Lord to give you a word beginning with if for the person you are ministering to, and launch into the prophetic flow. This activation challenges the recipient to obey and be blessed. If you are willing and obedient, you shall eat the good of the land. —ISAIAH 1:19 The prophetic utterances and words can flow as long you are able to connect to the Him. So know the method that Works for you Can you open your mouth and begin to speak in the spirit... Place your hand on your head and speak in the Holy Ghost.... Pray for the activations of the gifts I feel a stirring in my spirit now There's a release! Somebody open your spirit and receive! I see portals of the prophetic opening up I see coal of fire Channels of my spirit Open up!!! Open up! Open up! Open up! Open up! In the name of Jesus.Open up! Father we ask for the portals of the prophetic to open up in our spirits. To everyone that participated tonight in the service, I command a release of the prophetic in your life and ministry, in Jesus' name!

Assignment: This night, make a specific prayer, speaking in tongues and asking the Lord to activate the gift of prophecy in your life.