MYSTERY BABYLON THE SPIRITUAL CITY OF CONFUSION AND DIVISION 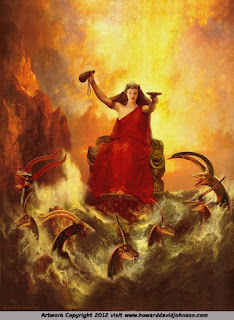 MYSTERY BABYLON THE SPIRITUAL CITY OF CONFUSION AND DIVISION ....

Revelation 17:5... And upon her forehead (her mind) was a name written, MYSTERY BABYLON THE GREAT, THE MOTHER OF HARLOTS AND ABOMINATIONS  OF THE EARTH...

THE WORD "BABYLON" IN THE BOOK OF REVELATION HAS ABSOLUTELY NOTHING TO DO WITH A NATURAL CITY OR GEOGRAPHICAL PLACE IN THIS NATURAL EARTH...

THE WORD "BABYLON" IN THE BOOK OF REVELATION IS A SPIRITUAL SYMBOL... speaking of a "state of being"--"state of mind" which is spiritually--- full of MAN'S CARNAL MIXTURE AND CONFUSTION....

BABYLON IS A SPIRITUAL CONCEPT AND CAN ONLY BE SEEN BY ANOINTED AND GRACED FILLED SPIRITUAL EYES....

Babylon in the seventeenth chapter of Revelation is symbolic thus speaking of the popular "religious church systems" reigning over multitudes of the church world today. The word "Babylon" when used in Revelation denotes "confusion and mixture". When we look into the various church denominations that exsist in the world, we see Methodist, First Methodist, Baptist, First Baptist, Second Baptist, Southern Baptist, Pentecostals of every type.  You name it the church world has "A NAME" for "THE CHRUCH". Ol the religious world has created each having a different take on the Gospel of Grace.

It seems the entire church world today totally ignores the words of the inspired Apostle Paul when he writes... 1Co 1:10... Now I beseech you, brethren, by the name of our Lord Jesus Christ, that ye all "SPEAK THE SAME THING", and that there be "No divisions" among you; but that ye be perfectly joined together in the "same mind"

and in the "same judgment". It's completely clear the church world today missed this word. No where in Paul's instruction do we find all this "BABYLONIAN" mixture and confusion-- No where in the Word of God do we find all these denominations or divisions--it is all born out of the "forehead and mind" of this harlot unsaved soul-- THIS IS THE "MYSTERY BABYLON THE GREAT".  There is one "TITLE" that can be written across the whole of the "religious church system"---

MYSTERY CONFUSION... It is the mixture of good and evil, of truth and error, of flesh and spirit that brings such confusion.

Yet, even while we acknowledge all this confusion, be it remembered, Babylon is still in the sovereign hand of ALMIGHTY GOD who controls "ALL THINGS".  Therefore even Babylon, in spite of all of its corruption, has been used by God for A PURPOSE.  ‘Babylon hath been a golden cup in the Lord’s hand, that made

all the earth SPIRITUALLY DRUNK.  And it is when her purpose is finished, that God has "DECREED HER END".  Yes my friend when God is finished with MYSTERY BABYLON THE  GREAT-- there will not be "ONE SOUL" left in this waste howling wilderness called denomination nor will there be any division left in His Holy Church.

We'll finally listen to Paul's admission-- would that ye all say the same thing-- THERE IS "ONE FAITH" and "ONE TRUE EVERYLASTING" gospel to be lived out and proclaimed.  It is

a prophetic word guaranteed by God himself of it's fulfillment according to the council of His will--- THE RELIGIOUS CHURCH WORLD SHALL BE CONSUMED BY HIS GLORIOUS COMING AND APPEARING--THUS EVERY CAPITIVE SHALL BE SET FREE AND RETURN UNTO OUR LORD!

in the land of Shinar, and proceeded to build a city and a tower, but God intervened, confounded their language, and scattered them.  Therefore is the name of it called "BABEL--religious church world"; because the Lord did there "CONFOUND AND CONFUSE" the language of all the earth.  The Hebrew word for ‘confound’ used here is ‘babal’ meaning: to mix, to mingle, and thus literally to mix "SELF-FLESH" in.  The more self-centered each man became, with his own expression--his own divisions, the less they could communicate with others, so frustration took over, and they left off building, and went every one his own way.  Though self had been in evidence

beforehand, now it was turned inward, and thus caused greater confusion.”  There has nothing divided the church world like all these man made denominations--man made divisions called "MYSTERY BABLYON THE GREAT".... for she is "THE MOTHER OF HARLOTS AND ABOMINATIONS"..... This mother has birthed her daughters-churches which are from her loins thus showing forth her image all over the "religious church systems".

Even now this "BABYLON THE GREAT--THE GREAT WHORE"--"the systems of religion" consumed and spiritually drunk with "the dead letter of the word" interpretation of God is making and raging war against the Lamb's truth in and by the Spirit of Revelation--- but here is the end of this division.... HERE IT IS...THE PROMISE OF THE ALMIGHTY...  Rev 17:14... These shall make war with the Lamb, and the Lamb shall overcome them: for he is Lord of lords, and King of kings: and they that are with him are called, and chosen, and faithful.

Ol the beauty of the "END AND DESTRUCTION" of this evil prison house holding our brethren in bondage and captivity.  HERE IT IS... Rev 17:15... And he saith unto me, The waters which thou sawest, where the whore sitteth, are peoples, and multitudes, and nations, and tongues.  Yes my friend we all thus the entire church world have drank from the cup of "Babylon's carnal literal confusion".... but thank God in this awesome hour the "overcomers and firstfruits" of this present age are presently coming out of her.   Rev 18:3 ... For all nations have drunk of the wine of the wrath of her fornication, and the kings of the earth have committed fornication with her, and the merchants of the earth are waxed rich through the abundance of her delicacies.

Rev 18:4....  And I heard another voice from heaven, saying, Come out of her, my people, that ye be not partakers of her sins, and that ye receive not of her plagues.

Rev 17:16... And the ten horns which thou sawest upon the beast, these shall hate the whore, and shall make her desolate and naked, and shall eat her flesh, and burn her with fire. There is a company

is this hour that HATE RELIGION... Rev 17:17...For God hath put in their hearts to fulfil his will, and to agree, and give their kingdom unto the beast, until the words of God shall be fulfilled.  Rev 17:18... And the woman which thou sawest is that great city, which reigneth over the kings of the earth.

The Revelation of Christ reveals that Babylon is the spirit of harlotry — mixture.  Mixing the truth of God with the carnal philosophies of the world. Mixing the revelation of Jesus Christ with the confusion of religion or other strange voices; mixing the move of the Spirit of God with the promotions of man; mixing the work of God with the efforts of the flesh; mixing the light of Christ with the darkness of the carnal mind.  Our dear brother Mr. Eby writes... It is the soul joined to anything except the spirit of truth! It is harlotry.  It is the place of corrupt self-proclaimed ministry.  They can’t wait on God to develop something in them.  They must be saying something and

doing something for God!  They will prostitute the life of God in them with anything which will be to their benefit. They care nothing about purity and will accept any mixture so long as they can profit by it.  They receive their “life-force” from more than one source.  They seek out many lovers — join themselves to many causes,

trying to receive life from each.  Bigger crowds, bigger buildings, bigger television ministries, bigger, bigger, bigger — not better!  Not more godly!  Not more mature!  Not after God’s own heart!  All the works of man are soulish; man’s works exist in this world for the sensual, for the sole purpose of gratifying the desires of the carnal souls of all mankind.  Religious soulishness is for the same purpose!