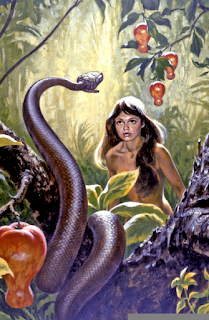 "Now the SERPENT was "MORE SUBTLE" than "ANY BEAST" of the field which "THE LORD GOD HAD MADE" ... Gen 3:1...
The word "GENESIS" MEANS AND REVEALS "origin" or "beginning," and the book of Genesis gives the only true and reliable account of the basic entities and conditions of the entire universe and of life. Genesis gives "VITAL TRUTH" concerning the "ORIGIN AND BEGINNING OF ALL THINGS" and therefore makes known the "TRUE MEANING OF ALL THINGS"! When God speaks of "the beginning" He is speaking of the originating point and start of the subject He is revealing. "In the beginning God created the heavens and the earth" (Gen.1:1). Here we see the origin of the heavens and the earth. It is written of Jesus when He had turned water into wine, "THIS BEGINNING" of miracles did Jesus in Cana of Galilee, and manifested forth His glory; and His disciples believed on Him" (Jn. 2:11). This means, simply, that the miraculous aspect of the ministry of Jesus Christ had as its originating point this miracle of the water turned into wine. He had performed NO miracles before this time, but from this day forth many more were to follow. Thus, so far as His miracles were concerned, was "the beginning-- the originating point."
The Holy Spirit emphatically declares concerning "THE SERPENT-SATAN"---"HIS NATURE" AND "WAYS OF OPERATION". Now THE SERPENT was "MORE SUBTLE" than any "BEAST" of the field which "THE LORD GOD HAD MADE" (Gen. 3:1). THREE KEY TRUTHS are here revealed concerning THE SERPENT that was placed in the garden IN THE BEGINNING OF HIS ORIGINAL CREATION: THE NATURE of the serpent is deceptive, deceiving, lying, shrewd, crafty, sly, and contradicts as he is continually working against the purposes and work of THE TRUTH OF GOD. Next THE NATURE of the SERPENT is A BEASTLY NATURE--- in his original creation he does NOT have THE NATURE OF TRUTH. BY NATURE THE
SERPENT-SATAN IS AN ENEMY OF TRUTH--THAT MUST BE OVERCOME AND CONQUERED. Even as Jesus our prototype overcame him in his wilderness experience casting him out of His
personal heavens--being revealed as he declared... and I saw Satan falling from my heavens as lightning. THIS IS A SPIRITUAL PICTURE OF OVERCOMING THE OLD SERPENT AND CASTING HIM DOWN. Then we learn "THE LORD GOD MADE HIM"! Thus IN THE BEGINNING OF HIS CREATION "THE SERPENT" is "SUBTLE", "BEASTY BY NATURE", and the "LORD GOD MADE HIM".
These truths are confirmed and clearly seen throughout the scriptures concerning the SERPENT.... Isaiah saw the beginning of the serpent.... Here it is... Isa 45:7... Speaking of the omniscient "ALL KNOWING" creator of "ALL THINGS"... I form the light, and create darkness: I make peace, "AND (I) CREATE EVIL: I the LORD do all these things. Jesus empowered by the Spirit of Truth saw the serpent from his beginning--HIS ORIGINATION... Jhn 8:44... Ye are of your father the devil, and the lusts of your father ye will do. He was "A MURDERER" from "THE BEGINNING", and "ABODE" not in THE TRUTH, because there is "NO TRUTH" in him. When he speaketh a lie, he speaketh of his own: for he is "A LIAR", and the father of it. Jesus calls Satan "A MURDERER-- A LIAR" from the beginning of his originating point. The Greek original text concerning the word "BEGINNING" is G746 - archē... meaning: that by which anything begins to be, the origin. Jesus "THE TRUTH" saw that Satan was created a murderer and a liar from the beginning of his creation.
TRADITIONAL MAN says that the serpent in the Garden was a mere reptile that had scales on the outside of his body. Missing
completely the spiritual truth revealed unto John on Patmos. Many pictures have been painted of the snake dangling from the limb of a tree, having his talk with Eve. But the Spirit of truth reveals this
conversation and temptation was happening WITHIN the heart of Eve. In the book of Revelation we have THE TRUTH given by the Spirit of Revelation unto the apostle John concerning Satan---the old serpent. This truth is stated TWICE in the book. TWO is the number of WITNESS, thus has God given a clear WITNESS concerning the identity of the serpent. Rev 12:9... And the great dragon was cast out, that OLD SERPENT, called the Devil, and Satan, which deceives the whole world: he was cast out into the earth, and his angels were cast out with him ... Rev 20:1-2... And I saw an angel come down from heaven, having the key of the bottomless pit and a great chain in his hand. And he laid hold on the dragon, that OLD SERPENT, which is the Devil, and Satan, and bound him a thousand years. Here Satan is called "that old serpent." The word "OLD" is from the Greek word "archaios" which means ORIGINAL or PRIMEVAL. "Primeval" means FROM THE FIRST AGE OR AGES--- PRIMITIVE. The Greek word "arche" which means A COMMENCEMENT OR BEGINNING. The Greek word "archomai" means TO COMMENCE IN ORDER OF TIME. Putting this all together we can see that SATAN is that OLD serpent, that ANCIENT serpent, that ORIGINAL serpent, that PRIMEVAL serpent, the serpent of THE FIRST AGE, from the BEGINNING, who existed AS A SPIRITUAL SERPENT right FROM THE BEGINNING OF TIME!
Blessings All!