MINISTRY UNDER JESUS CHRIST IS IMPRISONMENT 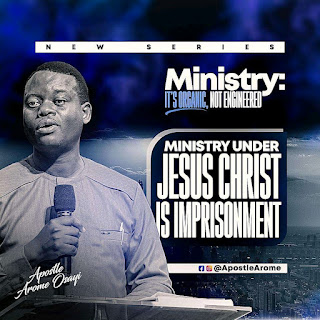 MINISTRY UNDER JESUS CHRIST IS IMPRISONMENT

Paul, again, referred to himself as a prisoner of (for the sake of) Jesus Christ (Philemon 1:1). This means by choice, he decided to subject himself to the restraining disciplines of the Lord for the liberty of others in the gospel.

He willingly checked into the ‘Lord’s prison’ from which he could effectively dispense his service to the Lord as an apostle to the gentiles.

His capacity for mighty revelations was restrained with a thorn in his side, his multiterritorial anointing was tempered with the leash of persecutions and the most malignant hostilities that the gentile world could forge against him. Yet by his imprisonment under the Lord, the liberty of the gospel of Jesus Christ was served wholesale to the gentile world (Ephesians 3:1).

He was literally being constricted by the Lord so that the juices of life squeezed from his vessel could be served to the dead, dark world of gentiles. His death was meant to produce life in those he served by the privilege of the stewardship of God’s grace (2 Corinthians 4:12, Ephesians 3:2)

For Paul, being a prisoner of the Lord Jesus was more than being thrown into physical jails. It was being firmly restricted by the Lord. This means his opinions, preferences and genius constantly came under the preeminence of God’s will. Paul could not simply do what he wanted. Every move he made was commanded by the Lord. This was a choice he had to make daily. He was free to get off the leash anytime he wanted. This is the same for anyone who is in the Lord’s service.

As a minister of Jesus Christ, you cannot just do what you want because you can and/or because you have the resources to so do. If you serve the Lord, the effectiveness of your service delivery is tethered to His commandments to you. Whatever you do that is not commanded by Him is either self-service or service of the devil. For in very deed, the Lord's service is predicated upon His commandments.

It's impossible to be an effective messenger (a choice servant) of the Lord without being constantly  instructed and commanded by Him through the Holy Ghost (Acts 1:2).