Home » Apst. Innocent Chuks » How To Unleash Supernatural Favor in Your Life part 1

How To Unleash Supernatural Favor in Your Life part 1 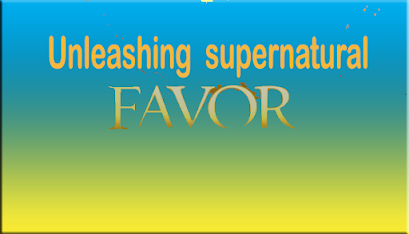 How To Unleash Supernatural Favor in Your Life part 1

Your life can overflow today with Favor greater than any past experience you can recall. “And Jesus increased in wisdom and stature, and in favour with God and man,” (Luke 2:52). It's possible to increase in Favor It's possible to move from one phase of favor to another. Ways To Unleash Supernatural Favor In Your Life:

1.     Wisdom Will Increase Favor. “Now therefore hearken unto Me, O ye children: for blessed are they that keep My ways. Hear instruction, and be wise, and refuse it not. Blessed is the man that heareth Me, watching daily at My gates, waiting at the posts of My doors. For whoso findeth Me findeth life, and shall obtain favour of the Lord,” (Proverbs 8:32-35). Wise people are more liable to receive favor than foolish people Blessed is he that hearth me, says wisdom. Which means when you hear wisdom, You attract favor into your life. To be attractive to supernatural favor, go for wisdom because favor won't go to the ignorant

4.     Appropriate And Right Words Often Generate Favor From Those Around You. “Death and life are in the power of the tongue,” (Proverbs 18:21). “Righteous lips are the delight of kings; and they love him that speaketh right,” (Proverbs 16:13)

➢ Words are magnets... Learn to use Appropriate Words. Learn to use right words. And in the process, You won't repel the favor coming to you, with your words

• Right words to your boss.

• Right words to your maker.

• Right words to your spouse.

• Right words to your friends.

• Right words to those who can be a blessing to you.

5.     Humility Generates Favor. “The fear of the Lord is the instruction of wisdom; and before honour is humility,” (Proverbs 15:33). Humble people will receive favor more often than proud and arrogant ones. Even the Lord resists the proud! Humility is so essential.... It has a key to your lifting I trust God that one day, we will treat on humility as a topic.

6.     A supernatural Skill Or Anointing Often creates Favor. “The king answered unto Daniel, and said, Of a truth it is, that your God is a God of gods, and a Lord of kings, and a revealer of secrets, seeing thou couldst reveal this secret. Then the king made Daniel a great man, and gave him many great gifts, and made him ruler over the whole province of Babylon, and chief of the governors over all the wise men of Babylon,” (Daniel 2:47-48). A Supernatural Skill Or Anointing Often Creates Favor. Because it is the gift of a man that makes way for him Daniel got this kind of favor in Daniel 2:47 because of the supernatural skill he had. Any spiritual gift can unleash divine favor for you An area that you are anointed, can be the key to your divine favor Don't worry about the gifts, or the Anointing you don't have. Develop the one you have. Because any gift from God can open doors of favor to you no matter how little you think the gift is Focus on developing your spiritual abilities and supernatural skills. It can unleash the favor of God

7.     Favor Increases When You Associate With People Of Integrity.

• Boaz had a great reputation for integrity

• Ruth gleaned in his field. That association brought blessing to all involved There's a saying that says, if four of your friends are smokers, soon you will be the fifth one. Same is true in the positive direction. When you associate with people of Integrity, favor will increase in your life.

8.     Favor Comes When You Solve A Problem. Daniel interpreted the King’s dream before all the wise men were going to be killed. His promotion was inevitable.

• Favor came because he provided a solution.

• Favor came to him because he knows what others do not know “For this cause the king was angry and very furious, and commanded to destroy all the wise men of Babylon. And the decree went forth that the wise men should be slain; and they sought Daniel and his fellows to be slain. Then Daniel went in, and desired of the king that he would give him time, and that he would shew the king the interpretation,” (Daniel 2:12-13, 16) If you solve problems, You will increase in favor 9.Favor comes when God causes those who can favor you, to remember you. The king was reminded that Mordecai had not been rewarded for revealing the plot to assassinate the king. The king scheduled a parade for him. “And the king said, What honour and dignity hath been done to Mordecai for this? Then said the king’s servants that ministered unto him, There is nothing done for him,” (Esther 6:3). “And Mordecai went out from the presence of the king in royal apparel of blue and white, and with a great crown of gold, and with a garment of fine linen and purple: and the city of Shushan rejoiced and was glad,” (Esther 8:15). God will cause people of substance to remember you, in Jesus' name! Those who forgot you will remember you in Jesus' name! If God doesn't cause some people to remember you, they won't. That's why I asked that Favor comes from the Lord In conclusion... When you enter into your season of favor, even those who forgot you for many years can remember you suddenly! 10.Obedience To God Guarantees Favor. “Ye are cursed with a curse: for ye have robbed Me, even this whole nation. Bring ye all the tithes into the storehouse, that there may be meat in Mine house, and prove Me now here with, saith the Lord of hosts, if I will not open you the windows of heaven, and pour you out a blessing, that there shall not be room enough to receive it. And I will rebuke the devourer for your sakes, and he shall not destroy the fruits of your ground; neither shall your vine cast her fruit before the time in the field, saith the Lord of hosts,” (Malachi 3:9-11). Obeying the word of God Guarantees Favor to increase in your life. Disobedience to God repels favor This is where we will end the teaching tonight.... We will continue from number 11 the next time. So we can call this teaching, How To Unleash Supernatural Favor in your life... Part 1 Part 2 will continue next week Thursday 9pm.

God bless you all