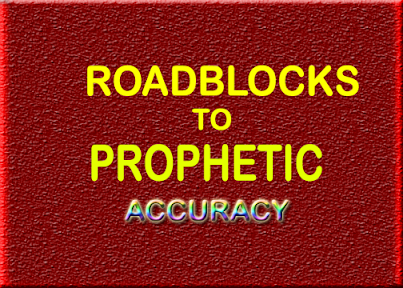 "Woe to them! For they have gone in the way of Cain, have run greedily in the error of Balaam for profit, and perished in the rebellion of Korah." —JUDE 11, NKJV ACCURACY IS IMPORTANT to the prophet’s ministry.

Accuracy is defined as the quality or state of being correct or precise. Prophets and prophetic people need to be careful that we guard our hearts against things that can block our prophetic flow and the accuracy of the word of the Lord. Can the fig tree, my brethren, bear olive berries? either a vine, figs? so can no fountain both yield salt water and fresh. —JAMES 3:12 Accuracy is important, and we want to speak what the Father gives us to speak.

James talked about both sweet and bitter water coming from the same fountain.

1.      Too opinionated: Many prophetic people stumble because they feel that their opinion is God’s opinion. Many times believers can become narrow-minded and dogmatic about revelations they believe to be a truth received from God. You must have the humility to accept that your opinion is not God's opinion and that you can be wrong sometimes.

2.      Prejudices: This can be cultural or religious. This includes being prejudiced to a race, gender, age group, denomination, or movement. If you biased about a particular race, of denomination, or gender, it will certainly affect your prophetic flow. Because prejudice blurs your spiritual sight

3.      Rejection and fear of rejection: Rejected people need deliverance or they will minister out of hurt. The priests could not have scabs(Lev. 21:20). Scabs are unhealed wounds that can become infected. Rejection leads to isolation, and prophets are called to associate and minister to people. Rejection can lead to prostituting the prophetic gift—prophets giving prophetic words to people just to be accepted by them. The root of this spirit is insecurity Basically we reason with ourselves, saying, “I will get acceptance if I tell them what they want to hear.” This also leads to flattery.

❖ Fear of man leads us around like a beast with a ring in our nose. We must fear God more than man. The only way to overcome fear is to have faith in God.

5.      Bitterness Unresolved hurts lead to bitterness. Hebrews 12:15 says, “Looking carefully lest anyone fall short of the grace of God; lest any root of bitterness springing up cause trouble, and by this many become defiled” (NKJV).

❖ Bitterness can be a root hidden in the heart going undetected.

❖ If you harbor bitterness in your heart, You can't flow in prophetic Accuracy.... No, You won't.

6.      Respect of persons: This can be a religious spirit. Have respect for all men but not in the disposition that you fear men more than God. True prophetic ministry will learn how to minister the word of the Lord to all kinds of people and denominations because Jesus is Lord of all the earth. A Baptist preacher once said, “I’m Baptist born and Baptist bred, and when I die, I’ll be Baptist dead.” Some people will never leave the church denomination, and this shouldn’t disqualify them from receiving a prophetic word. The prophetic anointing is not designed to change church culture; it’s designed to change the hearts and minds of the people who affect the culture. Prophecy is never used to establish new principles in a denomination or organization. A skilled prophetic minister can deliver the heart of God without partiality. James 2:9 says, “But if ye have respect to persons, ye commit sin, and are convinced of the law as transgressors.”

7.      Human compassion: This is having compassion on that which God is judging. Jesus rebuked Peter and said, “Get thee behind me, satan” (Matt. 16:23) Jesus spoke what He saw the Father doing... Don't speak from human emotions. Speak from the Mind of the Spirit

✓ Prophetic people cannot allow human compassion to dictate their prophetic flow. There are times you need to minister correction to people you love, and it can be hard, but prophets must pledge their allegiance to the Lamb of God. Prophesying or declaring truth brings deliverance to the hearer

8.      Judgmental: This is the opposite of mercy, and when one has a religious spirit he can point out problems with great accuracy but seldom have a solution

▪ Beware of pride and being overcritical.

▪ A Judgmental spirit is not from God...

▪ Fault-finding is not from God. If you see through the eyes of love, not Judgmental attitude or Fault-finding will be seen in you. The critical prophet with pointing of the finger is not ministering out of the heart of God.

9.      Judging by appearance: Looking at a person’s hand for a ring before giving a word about marriage or looking at someone’s countenance for some emotional signals is judging by appearance. Most of the times, appearance of people doesn't tell their situation. Samuel had to anoint David although he was a boy. God told the prophet to judge not according to appearance (1 Sam.16:7).

10.  Lust: The simple definition of lust is having a self-absorbed desire for an object, person, or experience.

▪ When we are in lust, we place the object of our desire above all. Prophets must guard their hearts from the lust for power, prestige, promotion, and wealth. Unresolved lust issues of the heart have serious implications to the validity of a prophet’s ministry.

If you’re not delivered from them, they can entice and drag you down a path of falsehood, causing you to potentially become a false prophet.

It is lust that has taken many who started in the spirit, to end in the flesh. “But every man is tempted, when he is drawn away of his own lust, and enticed” (James 1:14). Prophets have to be developed in the proper environment, else they can develop or be influenced by religious spirits. Religious spirits work where people believe in prophecy and the gifts of the Spirit. We need discernment and deliverance to avoid contamination. Prophets cannot allow any bias to affect their words. Bias is prejudice in favour of or against one thing, person, or group compared with another, usually in a way considered to be unfair. God is fair, and He is no respecter of persons.

God bless you all for reading